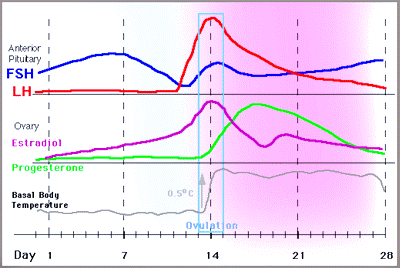 Do you want to get pregnant?

You have to know how to calculate your ovulation date to time intercourse with your partner in order to get pregnant.

During each monthly cycle, couples who are in their 20s – early 30s, and who have no problems, have 20 % of chances to get pregnant. They have to keep trying month after month by timing sex with the ovulation and fertile days.

To become pregnant normally, one or more of your mature eggs have to meet with your partner's sperm in the fallopian tube.

Your egg lives between 12 - 36 hours after ovulation.

So the meeting of egg and sperm has to occur within this time.

Sperm can live in your vagina, uterus and fallopian tubes up to 6 days.

This means that you don't have to time sex to the exact moment you ovulate to get pregnant.

You actually have a fertile window of about 7 days.

This window includes the five days before ovulation and up to 2 days after ovulation.

So, if you have sex at any time during your fertile window, your freshly ovulated egg could meet a live, healthy sperm and be fertilized.

To help you know your ovulation date and the days when you can get pregnant, use the ovulation calculator of Dr. Najib Dagher:

Ovulation usually happens between 12 and 14 days before your next period starts.

The first day of the period (menstrual cycle) is the first day you see a good flow of blood, not spotting.

There is one condition to know the date of ovulation by using the length of the cycle. You should have a regular cycle (menstrual period).

Implantation of a fertilized egg takes place 6 – 12 days after ovulation.

Your ovaries do not necessarily ovulate in turns. They ovulate randomly.

When ovulation happens if you don’t have a regular cycle?

Some women have an irregular cycle. If your cycle is irregular, ovulation may occur a week earlier or later from one cycle to the next.

If you have an irregular menstrual cycle, you have to use other methods to approximately know your ovulation date:

The main signs and symptoms of ovulation include:

·         Spotting: Mid-cycle spotting is believed to be a result of the sudden drop of Estrogen before ovulation. Because no progesterone right away, the lining can leak a small amount of blood until then.

Make a chart by measuring your basal body temperature every day during your menstrual cycle.

The basal body temperature (BBT) is the body temperature measured in the morning after just waking up and still in bed and even before sitting or standing up or talking, at least after 3 to 5 hours of sleep.

The BBT changes through your menstrual cycle depending on the hormone levels.

During the first half of the cycle, Estrogen is the dominating hormone. During the second half of the cycle (after ovulation), there will be a surge in LH hormone and Progesterone. Progesterone increases your body temperature. This means that your body temperature before ovulation will be lower than it will be after ovulation. Your BBT reaches the lowest level at ovulation and rises immediately (about half a degree) as soon as ovulation takes place.

This means that ovulation will take place when the basal body temperature rises suddenly.

Some women may have some light blood or spotting during ovulation.

20 % of women can feel the signs while ovulating. During ovulation a woman can feel a pain or a series of abdominal cramps in the lower abdomen. This may last from a few minutes to a few days.

This is the result of maturation of an egg or the release of an egg during ovulation.

If you pay attention to such signs, you may know when you are ovulating.

If you notice these sensations at almost the same time each month, check your cervical mucus. Ovulatory pain can be a useful guide to when you can get pregnant.

Cervical mucus is the discharge or liquid that goes out from the vagina.
Changes in your cervical mucus can signal when you are reaching ovulation.

After your period finishes, your vagina will be almost dry. You’ll not have enough cervical mucus. As the cycle continues, you’ll notice an increase in the amount of the liquid discharged (cervical mucus). At the beginning, the color is almost white and if you stretch it between your fingers, it will break. As you get closer to ovulation, the mucus will increase in quantity but will become thinner and clearer (more transparent), and will become more slippery like an egg white. If you stretch it between your fingers, it will stretch before breaking. This is a sign that ovulation is approaching. Once ovulation occurs, you may get dry again or even develop a thicker discharge.

You are most fertile when your mucus becomes clear, slippery and stretchy. It's like raw egg white. This fertile mucus speeds the sperm through your uterus. It nourishes and protects the sperm as it travels towards your fallopian tubes to meet the egg.

Feeling sexy, flirty and more sociable may all be signs that you're at your most fertile.
You may notice a peak in sexual desire at this time.

The breasts may become more tender and sensitive during ovulation.

For further information about ovulation and how to get pregnant by determining the ovulation date, contact

Dr. Najib Dagher started his medical studies in Bordeaux – France. He obtained his MD degree and then a specialty in Obstetrics and Gynecology as well as REPRODUCTIVE ENDOCRINOLOGY - HUMAN REPRODUCTION - Infertility & IVF in 2006.

He then pursued his career in many Hospitals…